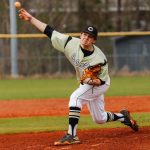 Junior Tate Abbott was chosen to the AAA All-State Team by the South Carolina Baseball Coaches Association for his performance on the field as a pitcher and a position player with the Camden Bulldog’s Baseball team this spring.  He was one of 26 players throughout the state selected in the AAA classification.  Abbott had a 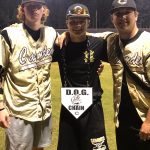 Bennett Caldwell led the Bulldogs to their second consecutive District Championship with a gritty pitching performance.  After defeating Emerald in Game 1 of the evening, the Bulldogs won the coin toss and were the home team for Game 2.  Caldwell pitched 6 innings and allowed one earned run, four hits, had three walks, and had

Camden defeated Emerald 5-3 in Game 1 of the District III Finals in the AAA Baseball Playoffs on Monday night in Emerald.  Owen Newman came in to relieve starter Sam Ferguson in the bottom of the third inning and finished out the game on the mound to earn the victory.  Newman had 4 and 1/3

Tate Abbott led the Bulldogs to victory in an elimination game on Saturday at West Oak High School in the third game of the playoffs with a complete game shutout victory 3-0.  Abbott allowed only 4 hits in the process with one strikeout, one walk, and one hit batsman.  The Bulldogs will “survive and advance” 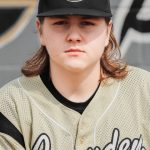 On Thursday night at American Legions Field the Camden Bulldogs advanced in the playoffs with a 10-0 victory over Carolina High School.  Owen Newman led the Bulldogs to victory earning his second win of the season with a complete game 2-hitter.  He struck out 8 batters and did not walk any in an efficient 63

No Events This Week

Events are added by athletic staff.
View All Events